The Trinity Knot and Eternal Love 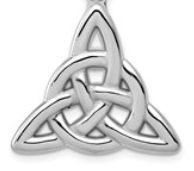 Best known as a symbol of Irish ancestry, the Trinity Knot has quite a history. The Trinity Knot is also called triquetra which is Latin for three-cornered and has been found across the globe with significance in many cultures. It has been found in India, tracing back to 3000 BC. It also appears on coins from early Lycia (modern day Turkey) as well as Germanic coins.

Different cultures and religions have different interpretations for the design. In Christianity, it symbolizes the holy trinity, the father, son and holy spirit. In Celtic culture and religion, the Trinity Knot represented anything important that came in threes including the three elements of fire, water and earth, and the three-fold form of the Goddess – the Maiden, the Mother and the Crone.

With no beginning and no end, the Trinity Knot is also represents eternal love. In jewelry, it can be found in earrings, charms and rings. Due to the association with eternal love, it is popular as a gift for anniversaries, engagements and weddings.

Stop by Bridgewater’s to find your perfect piece of jewelry with this beautiful design.

The Star of India Origin of Jewelry