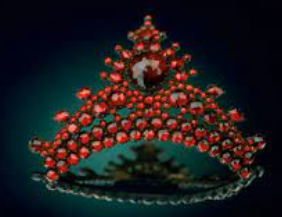 Those born in January have garnet as their gemstone. The name originates from medieval Latin granatus, meaning pomegranate. Garnets have been popular since the Bronze Age. The Pharaohs of Egypt wore necklaces with red garnets while the ancient Romans used garnet intaglios to stamp wax to secure important documents. In the Middle Ages, garnets were popular with the clergy and nobility.

While garnet comes in many colors, the most well-known is the pyrope garnet which is usually deep red (from the Greek pyrōpros, which means “fiery-eyed”). The most famous garnet jewelry is the Antique Pyrope Hair Comb which is part of the Smithsonian collection. The hair comb was created in the Victorian Era and all of the garnets are rose cut which was very popular during this period. The hair comb features a large garnet at the crest, surrounded by smaller garnets.

Garnet is very durable and comes in a variety of colors. Stop by Bridgewaters to find your perfect piece!