Koh-i-Noor Diamond, The Mountain of Light 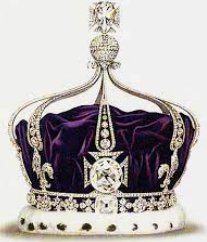 Centuries of turmoil surround the Koh-i-Noor diamond and the debate over its ownership is still under dispute. The Koh-i-Noor came from India, sifted out of the river sands and is first written about in 1628. The Mughals, who came from Central Asia, invaded India in 1526 and would rule India for 330 years. In 1628, the Mughal’s ruler created a magnificent, gem-encrusted throne which became known as the Peacock Throne and the Koh-i-Noor was lodged at the very top in the head of a gemstone peacock.

The throne was taken as part of the treasure when the Persians invaded in 1739 and the Koh-i-Noor remained in Afghanistan for 70 years. The diamond returned to India after decades of fighting and came to the attention of Britain. In 1839, as part of British expansion and colonization, the British gained the Koh-i-Noor. The stone was recut, reducing its size by half, but making it shine more brilliantly and was worn by Queen Victoria as a brooch, then in the crown of Queen Mary, Victoria’s grandson’s wife and finally in the crown worn by the Queen Mother, wife of George VI and mother of Elizabeth II. It is now part of the British Crown Jewels.

Debate is ongoing about who owns the Koh-i-Noor with India, Pakistan, Afghanistan and Britain claiming ownership. With many of the nations headed by rulers who once owned the gem no longer in existence it is very difficult to determine who has the first and most legitimate claim to the stone. For now, the diamond will remain as part of the Crown Jewels while research of its history and debate continues.

Have you seen the Crown Jewels and the Koh-i-Noor? Share your experience with us on Bridgewater’s Facebook page.