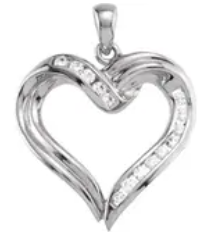 The Heart Symbol is known throughout the world as a symbol of love, affection and romantic love. But what is its origin? There are many theories including that it is from the shape of ivy leaves which are associated with fidelity or that it is based on the shape of some parts of human anatomy (you guess which ones!).

In the ancient world, Egypt, Rome and Greece, it is theorized that it is based on a species of giant fennel called silphium as the seed of that plant closely resembles the heart symbol. Silphium was used to treat many ailments including sore throat, coughs and warts, but was most famous as a form of contraceptive. The plant was so popular that it was cultivated to extinction by the 1st century BCE.

Others argue that the symbol has roots in the writings of Galen and Aristotle who described the human heart as having three chambers with a dent in the middle. Beginning in the Middle Ages, artists began to draw the heart based on these writings. The shape was eventually drafted into the symbol of romance. It was very popular in religious art of the Renaissance and, during this time, was used as one of the four suits in playing cards. By the 18th and 19th centuries, it had become part of love notes and Valentine’s Day cards.