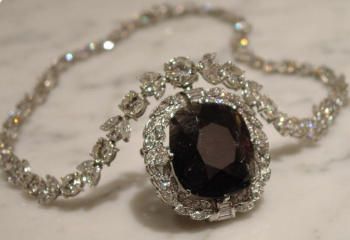 The Black Orlov Diamond, also known as the Eye of Brahma Diamond, is a 67.50 carat diamond. It was once part of a 195 carat diamond that legend says was one of the eyes in a statue of Brahma, the Hindu God of Creation, in India. Legend also says the stone was stolen by a traveling monk and became cursed.

The diamond came to the United States in 1932 with a diamond dealer, J.W. Paris. After finding a buyer for the diamond, Mr. Paris jumped to his death in New York City. He is believed to be the first victim of the diamond’s curse.

Prior to coming to the United States, the diamond was thought to be in the possession of Russian Princess Nadia Vygin-Orlov, who is the source of the stone’s name. In 1947, after fleeing to Rome 30 years earlier, the princess jumped to her death. Additionally, one month prior to Princess Nadia’s death, another Russian princess, Leonila Viktorovna-Bariatinsky, and owner of the Black Orlov Diamond also committed suicide.

This all sounds like a fantastic story, however, there is very little supporting evidence and is most likely untrue. We do know that the diamond was purchased in the 1950s by Charles F. Winson who had it cut into three pieces with the 67.50 carat portion being set in a brooch of 108 diamonds, suspended from a necklace of 124 diamonds. Nothing is known about the whereabouts of the other two pieces. And no other violent death has been associated with the diamond since.

November Birthstones – So Many Choices The Heart Symbol