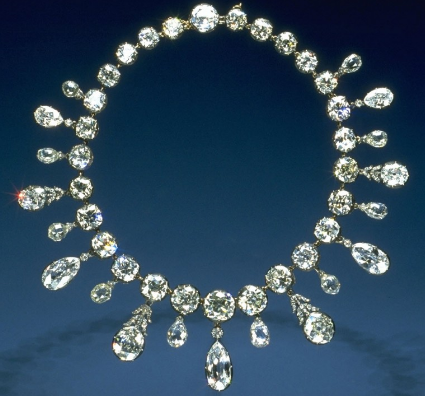 Famous jewels and jewelry often seem to have an illustrious past and the Napoleon Diamond Necklace is no different! The necklace, set with 234 diamonds with an overall weight of approximately 263 carats, was a gift from Napoleon Bonaparte to his second wife, Marie-Louise of the Austrian House of Hapsburg, Empress of France, upon the birth of their son Napoleon II.

After Marie-Louise’s death, the necklace remained in the family for several generations until, in 1929, the current owner, Arch-duchess Maria Theresa sent the necklace to the United States to be sold for $450,000 with her agents, a grandnephew and two others who used the pseudonyms, “Colonel Townsend” (supposedly in the British Secret Service) and his novelist wife, “Princess Baronti.” Following the stock market crash, the Townsends sold the necklace for $60,000, sending $7,270 to Maria Theresa and keeping the rest as expenses. The courts returned the necklace to Maria Theresa and her grandnephew went to jail. Colonel Townsend and Princess Baronti disappeared and their identities have never been uncovered.

Eventually the family sold the necklace in 1948 and its final owner donated it to the Smithsonian Institute in 1962. It can now be viewed at the National Museum of Natural History in Washington, D.C.

The Birthstone of Love and Passion Caring for Gems: Ruby