What is the Origin of the Peace Symbol? 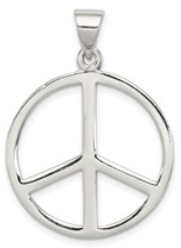 The Peace Symbol, designed by Gerald Holtom, was created as the logo for the British Campaign for Nuclear Disarmament (CND), a group at the forefront of the peace movement in the UK. Accepted on February 21, 1958 as a symbol for a march from Trafalgar Square, London to the Atomic Weapons Research Establishment at Aldermaston in Berkshire on 4 April, the symbol was later adopted by the American civil rights and anti-war movements in the 1960s.

Eventually, the Peace Symbol was re-interpreted as representing world peace and has been found all around the world where freedom and peace are threatened. The symbol was never copyrighted so that it could be used anywhere around the world for free.

Where Did the Tradition of Engagement Rings Come From? Keep Your Jewelry Beautiful – Jewelry Care Tips