Beliefs about Sapphires, the September Birthstone 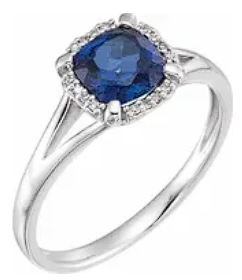 Blue sapphires are one of the most popular colored stones. And those lucky enough to be born in September have it as their birthstone. Throughout the centuries, people believed many different things about sapphires. The elite of ancient Greece and Rome believed they protected their owners from harm and envy. The clergy of the Middle Ages wore them because they symbolized Heaven and ancient Persians believed the earth rested on a giant blue sapphire which made the sky blue.

Sapphires are also believed to have healing powers. They were thought to be an antidote to poison and could heal eye ailments. Medieval Europeans believed sapphires could aid in mental health and overall well being. Depending on what finger the sapphire was worn, bestowed specific health benefits, for example, wearing one on the index or first finger eased ailments of the stomach and respiratory system while wearing one on the second finger strengthened the mind, liver and spleen.

Sapphires have been around longer than mankind and have been revered throughout history. What is your favorite belief about sapphires? Share on the Bridgewater Facebook page.

How Many Diamonds Fit on a Single Ring? Finding Your Partner’s Ring Size…Covertly!