Famous Gems: The Most Famous Diamond in the World 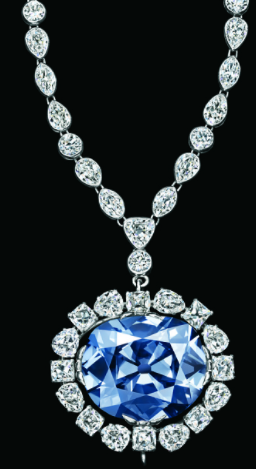 The Hope Diamond has been called the most famous diamond in the world due to its rare blue color and size of 45.52 carats. Earliest records of the diamond are from 1666 when the original stone, a 112 3/16-carat diamond originally from the Kollur mine in India, was purchased by French gem merchant Jean-Baptiste Tavernier.

The stone, called the Tavernier Blue, was sold to King Louis XIV in 1668. In 1673, it was recut, yielding the French Blue which was set in gold and worn via a neck ribbon by the king. In 1791 the jewels of the French Royal Treasury were turned over to the government after Louis XVI and Marie Antoinette attempted to flee France and the diamond was stolen in 1792. The Hope Diamond then traveled to England where it may have been owned by King George IV before being sold. Somewhere along the way the stone was recut, with the largest section becoming the “Hope” diamond when it appeared in a catalogue of the London banking family, Hope, in 1839.

Many years and owners later, the Hope Diamond was purchased in 1949 by Harry Winston, a New York gem merchant, who eventually gave it to the National Museum of Natual History in Washington, DC where it is on permanent display. The Hope Diamond is set in a pendant with 16 white diamonds, both pear-shaped and cushion cut. The necklace chain contains 45 white diamonds.

A beautiful gem with a colorful history! Have you seen the Hope Diamond in person? Check out Bridgewater’s Facebook page and share your favorite famous gem!