Peridot – The Gem of the Sun 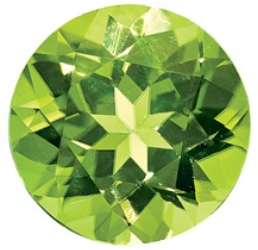 Peridot, the August birthstone, is typically a light green gem which is formed in the mantle of the earth at high temperatures then brought to the surface by volcanic activity or come to Earth on flaming meteorites. The Egyptians called them the “gem of the sun” and believed they had special healing powers. Hawaiians believe peridot are the tears of the volcano goddess Pele.

Peridot is associated with harmony, good health, restful sleep and peacefulness. When set in gold, it was believed to protect the wearer from nightmares. It is also known as the stone of compassion and calms anger by giving renewal to all things. You can see the largest peridot ever found, weighing in at 319 carats, at the Smithsonian Institute in Washington, DC.