The Crown of the Andes 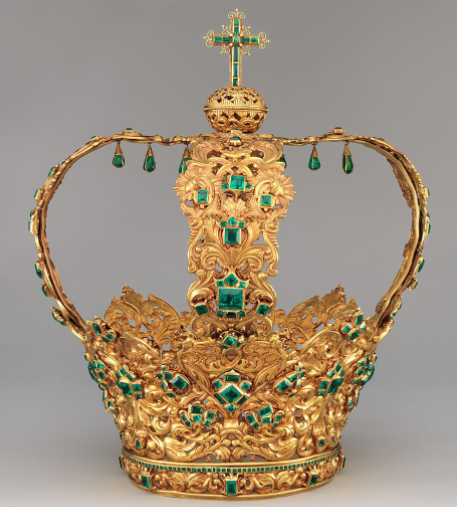 Since we are celebrating the birthstone of May, the emerald, it seems fitting to share information on the Crown of the Andes that includes nearly 450 emeralds, including one known as the “Atahualpa Emerald” which is twenty-four-carats. The Crown is one of the most important examples of colonial Spanish American gold work, crafted in the 1600s. Legend say the Atahualpa Emerald was taken from the last Inca emperor, Atahualpa.

The Crown of the Andes was made to adorn a sacred image, the Virgin of the Immaculate Conception, in Popayán Cathedral, in the former Spanish viceroyalty of New Granada (now Colombia). The Crown was crafted in parts, with the diadem in the 1600s and later, in the 1700s, four imperial arches, pear-shaped emerald pendants and an orb bearing an emerald studded cross were added.

The Crown of the Andes was used in Holy Week processions in Popayán. In 1936 it was sold to an American and changed hands several times until acquired by the Metropolitan Museum of Art in 2015 where it is on view.

An incredible piece of workmanship, showcasing the stunning beauty of the emerald. Share your favorite emerald pieces on Bridgewater’s Facebook page.

Emerald: The Gem of Rebirth and Renewal A Day in Old New Castle: The Nation’s Oldest House and Garden Tour