The History of Engagement Rings 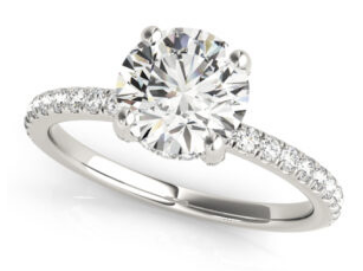 Have you ever wondered when and why engagement rings came to be? Well, it goes all the way back to the ancient Egyptians who believed circles were symbols of eternity. Couples exchanged braided reed rings which were worn on the left hand ring finger which has a vein that runs directly to the heart (the Vena amoris). Later, ancient Roman grooms would give their betrothed a gold ring to wear during the betrothal ceremony and at special events, then gave an iron ring to wear at home. The iron ring symbolized the bride’s legal agreement to the groom’s ownership of her. Not as romantic as our current traditions for sure!

The first use of diamonds in an engagement ring was in 1477 when Archduke Maximilian of Austria proposed to Mary of Burgundy, setting a precedent for European nobility who added gems to their jewelry. Diamond engagement rings didn’t become popular until De Beers launched an advertising campaign with the slogan “A diamond is forever” in 1947.

Whatever your taste and style, Bridgewaters can help you find or create your perfect engagement ring. Stop in to see us!